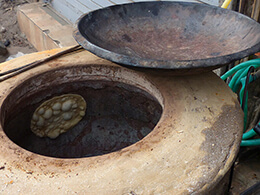 At the bottom of the tandoori oven, there are charcoals or usually wood fire, which is used to heat up the oven. The charcoals or the wood is generally lit up within the tandoori oven itself, which means that the food comes in to exposure with the live fire. This is great for foods that require radiant heat cooking, convectional cooking or hot air cooking. Additional smoke is generated by the fat as well as the juices that drip down on the wood fire or the charcoal throughout the cooking process. In common circumstances, the temperatures within a tandoori oven can escalate up to 480 degrees Celsius, or 900 degrees Fahrenheit. In comparison with various other ovens, the tandoori oven is lit for long periods of time so as to make sure that the cooking temperatures remain at a high level.

Apart from flat breads, a number of other food items can also be cooked in a tandoori oven. Tandoori chicken is perhaps one of the most common examples. Marinated chicken is placed inside the tandoor on a balanced dish. The tandoori chicken soon gains a yellow- orange color, after which it is removed and served.